During my short time in Spain, there were many places I did not get to visit, but I loved Girona so much I went there twice. As a Game of Thrones enthusiasts, trips there were pilgrimages to retrace the sacred steps and revisit some favorite scenes. Instead of paying an unreasonable amount of money to tour guides, I found a self-guided tour from a blogger and followed her steps exactly. 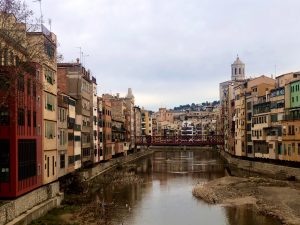 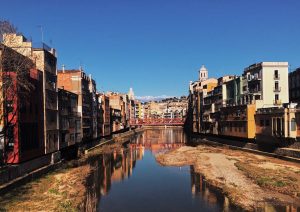 It was early February. I hopped on a blablacar (another gem I discovered that doesn’t exist outside of Europe) and paid 6 euros to ride from Sant Cugat to the heart of Girona. By the time I arrived at my humble residence at the hostel, it was almost 8pm and dark outside. I felt so excited about the town center and a huge fan of Arya Stark that I decided to make my way there anyway, even though most shops were closed. Across the narrow stream of Onyar, I saw Basilica de Sant Feliu and the Cathedral standing tall. I wandered from Carrer de la Barca all the way around the cathedral, passing by the archeological museum of Catalunya, the Arab bath. The empty and narrow alleys in the El Call Jewish area felt especially haunted in the dark. One of the most interesting experience was when I navigated the city walls of Girona in the dark. I went ahead in that direction as I wasn’t sure where to go next and saw it marked on Google Maps as an attraction. To my surprise, as I headed there from the German garden direction, the entrance was very narrow and discreet. There was absolutely no overhead lighting from the city walls, and I would have been in the dark completely if my phone had died. No one was there, not a single soul. I was by myself, on a narrow passage on top of the wall with no visible end in sight (for its darkness, not for its length), left alone to the dim lights afar from the village houses below. It was a rather transcendental experience, to feel the weight of history as I imagined battles taking place many years ago at this very spot. But all I could hear was silence. 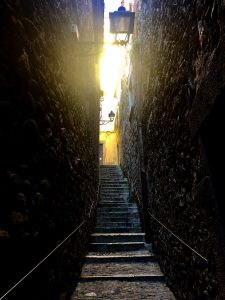 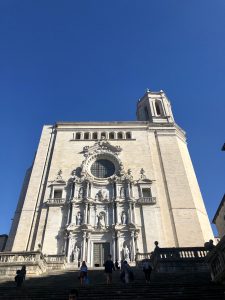 The next morning, I was excited again to go on the same route, but this time with the blessing of the sun. I will now elaborate on some of the memorable sites I visited. The Cathedral of Girona looked majestic as ever under the sun, and standing at the bottom of the steps, I could picture Jamie Lannister riding up his horse to the Queen’s rescue from the show. I went inside, grabbed my audio guide and proceeded. It contains the widest Gothic nave in the world along with the second-widest of any church after that of St. Peter’s Basilica. The site was originally home to a more primitive Christian church before the Islamic conquest, then it became a mosque, then under Charlemagne it became a church again. The church was finished in Romanesque style under Count Ramon Borrell of Barcelona, and since then redesigned a few times. I walked around, felt the use of my Latin education from high school while reading the epitaph on the ground. The idea of immensely powerful men who shaped history now turned into cold bones beneath my feet was unreal to me. The air was cold and even as a non-Christian, I felt the need to stay reverent in that sacred atmosphere, judged by the eyes of statues around me. One of my favorite items from the cathedral collection was the creation tapestry in the very last chamber. I marveled at the skill of weaver from a thousand years ago, at their imagination and the format of layout. Only the upper part remains, but it contained stories from Genesis, the cosmic elements and stories of the Holy Cross. God was at the center, surrounded by a circle that showed the seven days of creation, culminating at the birth of Adam and Eve. It felt to me like the decoration at a Christian psychic’s clinic.

I also enjoyed learning about St. Narcissus at the Basilica of Sant Feliu, the stories drawn onto the sarcophagus (interesting though misogynistic at times), the procedures for a proper Arabic baths, and the miserable history of the Jews at the town. It was fascinating to me that Girona had such a long, conflicted and diverse history, especially with regards to religion. As part of a cohort for Georgetown University’s Center for Peace, Religion, and World Affairs, I wrote the below paragraph for submission:

This historic town of Girona in the Catalonian region is known its stunning beauty and rich culture. On one side of the town lies the Girona Cathedral, originally used by the Moors as a mosque then later rebuilt after their expulsion, now represents the zenith of Catalan Gothic architecture. Right by the cathedral, the Basilica of Sant Feliu stands tall with its pointy spire and honors St. Narcissus, one of the earliest bishops and recognized by both Eastern and Western churches.

I navigated around the narrow alleyways of El Call, the Jewish Quarter in the heart of Girona, and felt as if I was strolling in medieval times. I imagined the streets bustling with lively scenes before Jewish residents had to choose between conversion to Christianity or expulsion to a foreign land. Amidst the silence, I heard their cry through history.
I had witnessed the multifaceted nature of Christianity on this peninsula—on the one hand, conducive to breathtaking Gothic art, and on the other, cruel and always intertwined with the political interests of the time.

It was also interesting to see elements of Catalonian independence exhibited in full flesh as I walked around town. Almost every tree, with or without leaves, had yellow ribbons hanging and dangling on them. There were spray paints and banners of “free political prisoners” all around, sometimes not without profane languages attacking the Spanish government. I saw drawn yellow ribbons on the ground, on every manhole cover, and notably on the houses near the Onyar river where every tourist would’ve seen as they walk on the many bridges and try to record the view with their camera. It was not my first time seeing yellow ribbons, but Barcelona never seemed so unitedly pro-independence as Girona did. That, I did not expect, but every time I brought this up to the locals, they all told me “of course, that makes a lot of sense”. I thought to myself, Girona is such a multifaceted city –– at a single time in history, it sits still with grace and beauty, but to fervid tv show fans, innocent tourists, political activists, or local Gironians, it means very different things.