Not far from the Fontana station in the Gràcia district in Barcelona, there lies a bustling street called Carrer d’Astúries. Merchants sell everything from organic fresh fruits to the trendiest dresses, pleasing tourists and locals alike. One shop stands out among them all—no matter the weather or hour of day, dozens of people line up in front, partially blocking the pedestrian road. The shop front is painted bright red, the large “Mistral” letters painted at the top with no further descriptions. The storefront was on my way to the Gràcia train station, so I pass it by at least twice daily whenever I had classes—once in the morning, once at night. In January, when my classes were too early in the morning, I never got to see the mysterious red door open. In fact, I never knew what it even sold until February. Once I realized what it was, I could not stop noticing it—its queue seemed to never shorten. 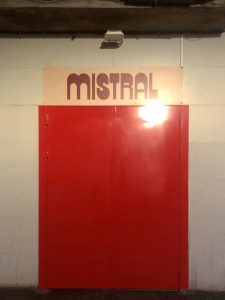 If you see the place for the first time, you might be mistaken that there are no other bakeries nearby. Elderly line up in front with babies in the strollers to wait for the freshest first batch of bread at its open at 11am, and likewise couples dressed in freshly pressed suit drop by to check whether there are some left behind to take home for dinner. No one seemed antsy about the wait nor complained. What is the magic of Forn Mistral that captivates their palates and minds?

The answer most likely comes twofold, in price and quality. Forn Mistral makes delicious artisan bread in Catalan style for much less than what you might expect from a successful family business. The decoration of this tiny shop recalls the Red Queen’s kingdom from Alice in Wonderland. The floor and the walls are filled with alternating black and white tiles like a chessboard, dabs of red, including the headbands of the shop assistants, decorate the rest of the bakery. At the same time, it is entirely possible to miss the décor only to focus on the variety of breads and pastries cooling off on the tall shelves on both sides. There is no menu—they sell what they make, with the confidence that in the end customers will buy whatever is left—and they are usually right. Small pastries sit behind the glass countertop, while larger whole bread lie on the sorted shelves behind the shop assistants who are always busy cutting, weighing, bagging goods.

I only discovered the names of each item through the tiny Catalan nametags and after excessive googling. In the whole bread section, Pa de Kamut was my absolute favorite. “Kamut” means “bread” in Egyptian, and Kamut bread is a style of wheat bread that traces its history back to centuries ago.[1] It is rich in vitamins, minerals and protein. Thick crumbs sit inside a crispy hard crust with dark coloring, beautifully opened with a wide cross pattern on top. I always ordered the Kamut bread freshly cut for me to go, and walked home with a brown bag of warm soft bread slices. The taste felt slightly sour and buttery, always completely embracing every palate of the tongue and when swallowed, left a sense of satisfaction always. There was never an artificial aftertaste. And the entire bread that weighs about 500g only cost 3.65 Euros. 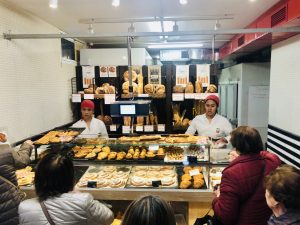 Other breads that I had tried included Pa de Xeixa, Kamut Integral, and a flattened hard bread glazed with sugar and nuts on top. As for the pastries, the mini-croissants with or without chocolate fillings are always popular with a high turnover rate. In the spirits of adventure, I tried a cupcake-shaped pastry perhaps named “magda” once, which left me both pleased and regretful. I could never be sure of its recipe, but perhaps it was the milk, or the egg, or something that the bakery chef used, but a plain-flavored chiffon cake should never smell so desirable and taste that soft with a slightly crispy crust on the side to the perfect degree of sweetness on its own. I loved it, but hated that I had not tried it earlier.

The morning before my journey to Montserrat, I ordered one Ensaimada con Cabello de Angel (which cost only 1 euro) to share with my friend. It was a fittingly named snack for the spiritual journey. This was before I ever learned about the tradition in Mallorca, but nevertheless Forn Mistral had given me an idea of what it might taste like—sticky and sweet, similar to the construct of a cinnabon in the US but flatter with sweet jam instead of melted sugar. I later discovered that the filling for this Angel Hair bread is pumpkin jam.[2] Since I did not ask, I could never figure out if they used pig lard or olive oil.

Throughout my 2 months in Barcelona, I had frequented Forn Mistral at least ten times. It was one of the few places I stumbled upon with pure serendipity and not a result of obsessive compulsive Google searches. In the end, when I recommended the bakery to my friends for the hundredth time, it felt like the shop was “my bakery”, in my “hood”. I found that Forn Mistral’s main location is in El Raval, with more than 100 years of history since 1879, now operated by the Bertran family after 5 generations.[3] The location in Gràcia only opened a few years ago after popular demand from the people at the reluctance of the shop owners, for they wanted to maintain the integrity and quality of the bread, lest it grows into a chain brand. The team behind the delicious baked good are chosen with care to ensure customer experience, while the baking itself is done with a balance of Catalonian traditional methods and constant innovation to improve the recipe. As a member of the Barcelona Bakers Guild, Mistral is one of the few bakeries in all of Spain authorized to bake with the old Khorasan wheat, Kamut, which means organic farming with strict standards—how was I to know that the Kamut bread I so cherished was a treasure among treasures! After 3 consecutive years of making into the finalist in the Best Catalan Farmer’s Bread competition, the bakery finally won the title in 2019. With such award-winning history, in the heart of Barcelona, Forn Mistral still maintained a low price and high quality of products and service. No wonder why the lines in front of the store never dispelled and drew me in with no other advertisement.

Carrer d’Astúries, the street that the store sits on is one of the wider pedestrian streets in Gràcia amidst the web-like district. Since it is on my way to school, it also did not take long for me to notice its rich culture and activism, signified by colorful graffiti on the walls, temporary stands selling old magazines and records, as well as political slogans chanting for Catalan nationalism. Whenever I look up, I see silent balcony politics at play, with striped Catalan flags hanging down the side near the plants and laundry strings drying clothes. Not far from Mistral, on the other side of the street, one night I witnessed a small rally echoing “independencia”, in front of a black graffiti phrase in Catalan that read profane remarks regarding the police. The convenient location not far from the subway station ensured lots of foot traffic on Carrer d’Astúries, along with all kinds of people. If I learned anything from my time in Barcelona, it was that there  is so much I still haven’t seen, and so much I still don’t understand about the root of the independence conflict that occupies such a central role in these people’s lives. Despite all of that, Mistral, to me, serves as a perfect cultural ambassador that brings people from all backgrounds together regardless of political beliefs with warm rustic bread, showcases brilliant Catalan artisanship to locals and tourists alike. When you taste their bread, it doesn’t matter how Catalan or Spanish you feel—all it matters, is that they make damn good bread and you can’t say no to it.